A few weeks Hopper posted an interesting article about route competition in aviation, and specifically about what happens when a Low-Cost Carrier (LCC) enters into a market.

The article starts out talking about the glory days of old, when savvy route-scourers could occasionally find super-cheap flights to desirable places (like a transatlantic flight to Europe), elevating these travelers to guru status among their friend circle.

Contrast that with today, when fares are lower than ever on most busy routes. In fact, flights to Europe were down 9.6% compared to 2014. The less Hopper draws from this research is – stop thinking about going to Europe, and GO NOW (now being Fall). Part of this fare decrease is due to more competition in aviation, in particular from the flood of LCCs entering the market, less demand from flyers, and a stronger dollar leading to relatively cheaper flights for Americans. Here are a few sample routes that have come down in price to competition in aviation and other factors, care of Hopper: 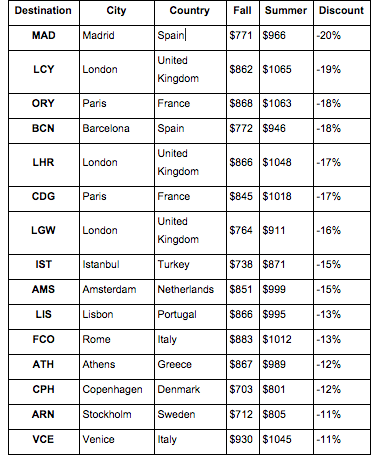 Routes that have benefited from competition in aviation

With LCCs like WOW Air and Norwegian Air Shuttle entering the European market, on top of Ryanair and easyJet, fare prices on frequently traveled routes continue to drop. Hopper decided to analyze this further. The company took a look at 24 popular routes from the East Coast of the United States to Europe that LCCs have recently begun flying. Some examples of these routes are JFK-CDG and BWI-LHR, among others that have recently witnessed heavy competition in aviation. Routes dominated by established carriers were purposely left out from the study, and carriers were classified in to three buckets based on price-points of the fares:

Here’s what happened when considering competition in aviation: 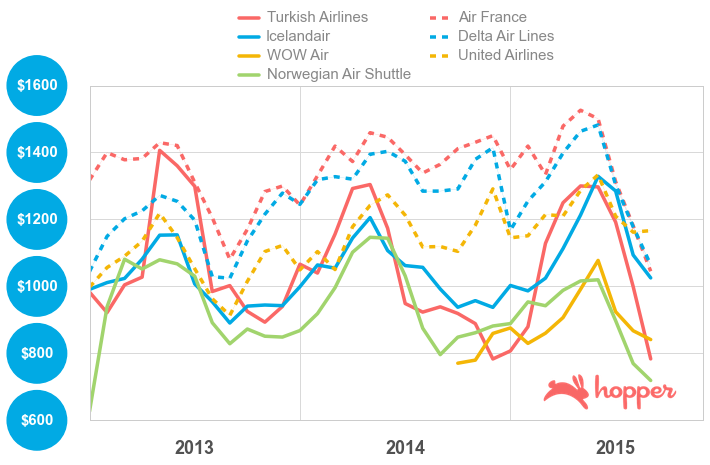 Fare prices due to increased competition in aviation – care of Hopper

You’ll notice that WOW Air entered the market in 2014 at a low price point. You’ll also notice that LCCs have much more seasonal volatility, while the established airlines have a smoother pricing function.

Also interestingly, here’s what happens to market share when an LCC enters the market, creating more competition in aviation: 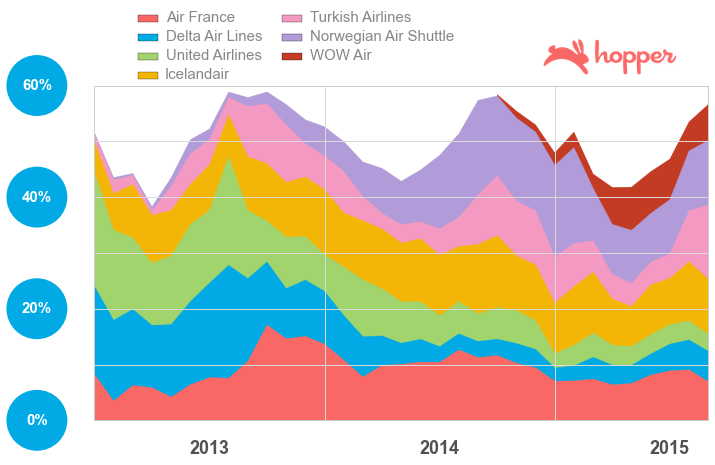 The lesson? If full-service airlines want to stay competitive in a world where LCCs and Ultra-LCCS are undercutting them on price, they need to shift their model and focus on other things passengers find valuable – like amenities and service. There is enough room in the aviation market for differentiated carriers as well as carriers competing on cost – knowing thyself and knowing thy business model is the key to success.