tripchi is proud to announce that Austin Airport (AUS) will be included in our Beta launch, accompanying other fine airports like Washington-Dulles, Dubai, and Charlotte. Austin Bergstrom is a small airport in comparison with the others in this group, but that doesn’t make it worse – in fact, being smaller gives an airport the challenge to work harder to find better content and offer superior customer service. Wouldn’t you be lured away from a mega-airport if flying from a nearby regional airport was just as convenient, offered less wait time, and better amenities? Even Fox News agrees.

Well, that’s the thinking behind the Austin-Bergstrom International Airport. Not only can you use it to fly in to Austin, but it’s located about 1 hour’s drive from San Antonio, making it an accessibly airport to several of Texas’s large cities. And first things first – don’t you just love how even Google Maps gives Austin Airport a nod for being a “Central Texas hub for Live Music.” 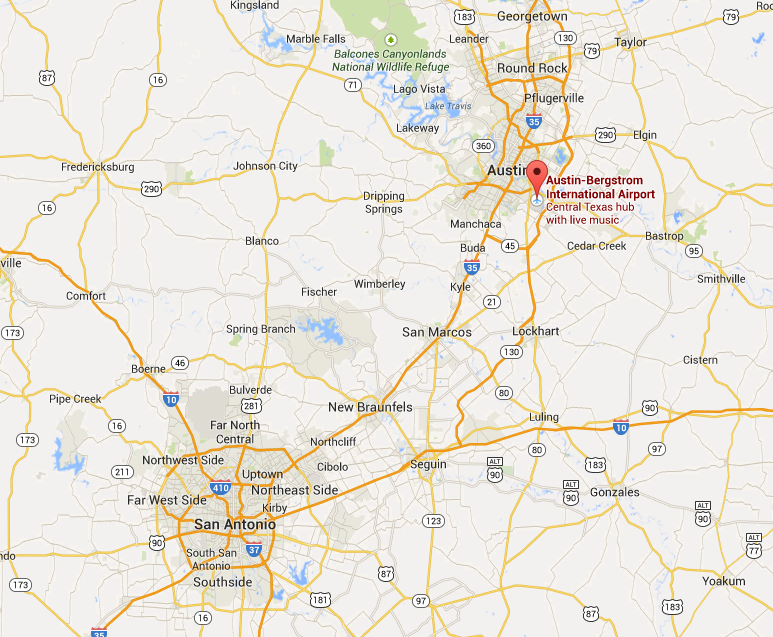 That couldn’t be closer to the truth. In fact, this is one of the only airports that we know of that regularly serves up LIVE MUSIC free of charge to its ticketed guests (post-security). This is all made possible by several generous sponsors. Here’s the September 2014 Austin Airport music calendar as an example – the Austin Airport website posts a new calendar every month here. Several locations throughout the Austin Airport offer free live music:

Getting situated at Austin Airport

Well, it’s a small airport, so getting lost is not really a problem. There were only 10 million passengers in 2013, making it a Class C airport for all your #avgeeks out there.  Currently, there are over 150 daily departures to 44 destinations in the U.S., Mexico, and United Kingdom. There is only one Terminal – the Barbara Jordan Terminal, designed by the Austin firm Page Southerland Page. The terminal is 660,000 square feet and has 25 gates. Only 2 restaurants and a flower shop are located pre-security.

So get there early to make it through security, and listen to some live music while you have a nosh! Not to mention that Austin Airport has free Wi-Fi – we’d expect nothing less from such a tech-forward city.

Also, special props go out to tweep @SlickNickRicky who took all the pictures for this blog – now that’s one killer #layovertip! 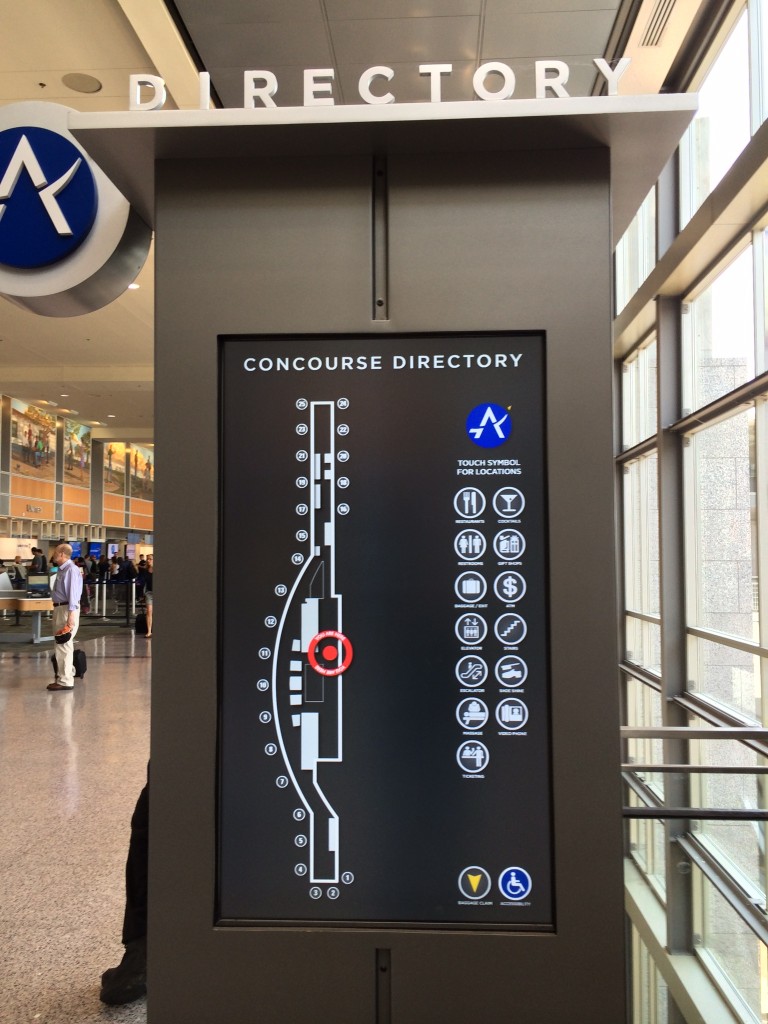 There’s only a handful of airlines that operate out of the Austin Airport, and the Ticketing Area is divided into East and West. Many of the airlines actually share counters.

Here’s a view to Ticketing East, where you can find American Airlines, United, US Airways, and JetBlue (among others). 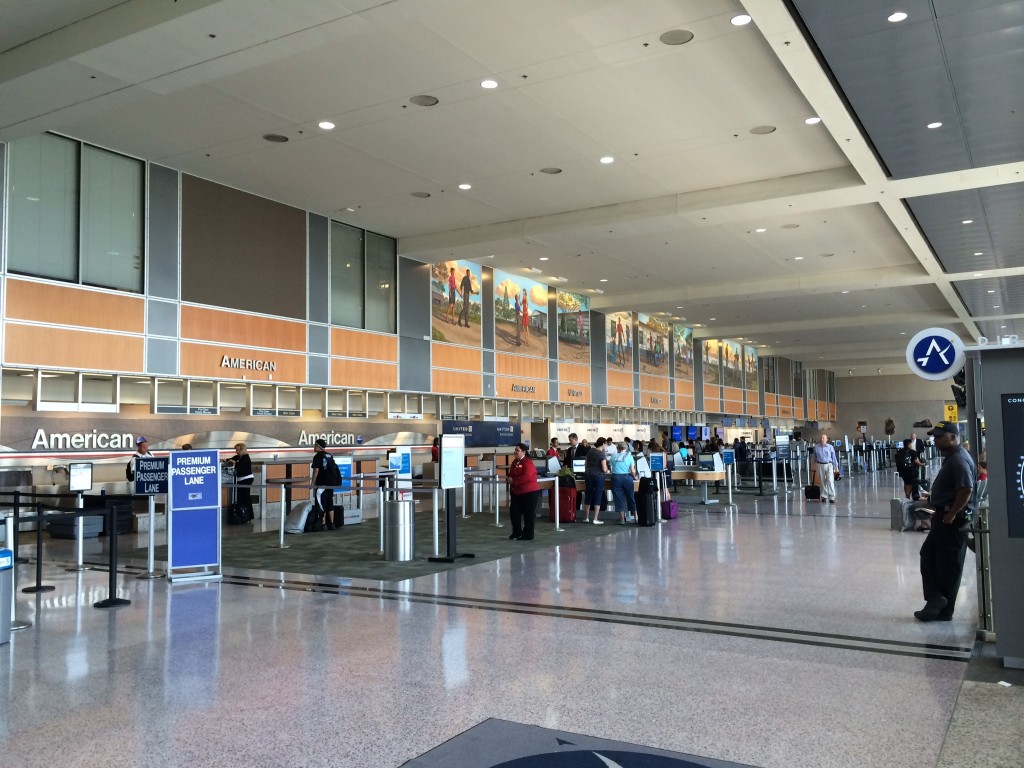 There is a TSA Pre-Check lane!!! Passenger screening checkpoints and checked baggage screening begin at 4AM daily. Peak travel times are the business rush from 5-8AM, the lunch rush from 11AM-1PM, and then again from 3-5:30PM for the rush-hour rush. Austin Airport advises that the wait time can be as much as 45 minutes (although we’ve never experienced this – one of the benefits of a smaller airport!).

A few of our favorites include –

Austin Airport offers many great options to kill time, grab a fast bite, or linger a while listening to live music and socializing with your like-minded Austinite travelers.

There’s a shoeshine for your dirty shoes. 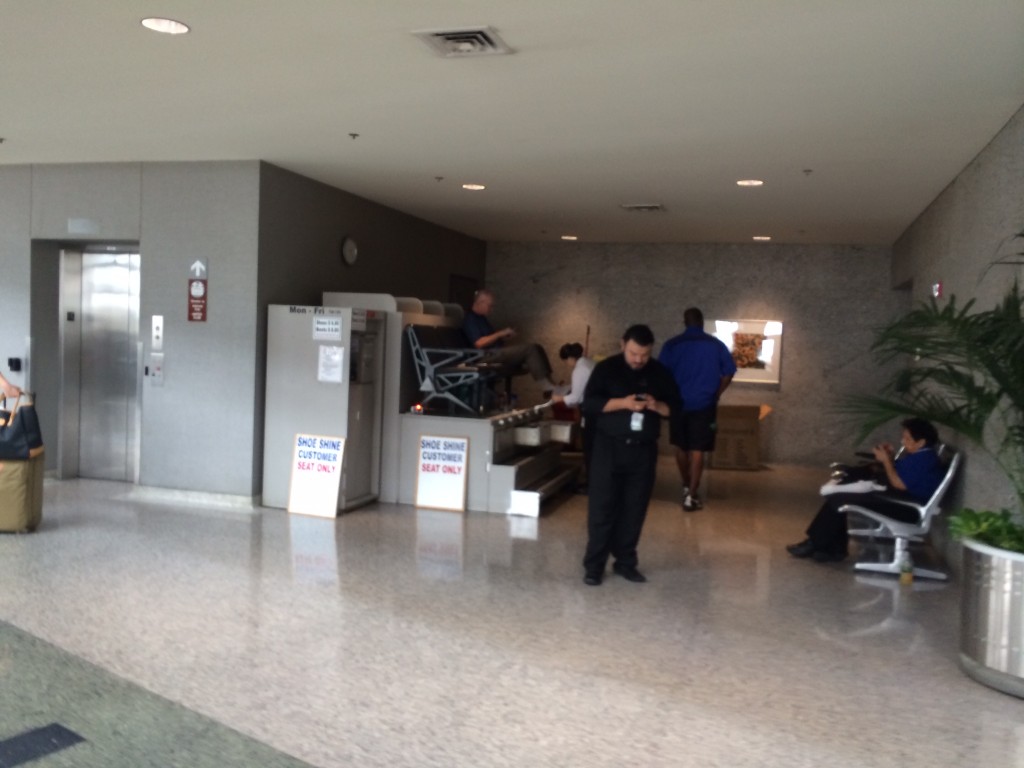 And a chair massage, for your aching, crammed-into-a-tiny-airplane-seat back. 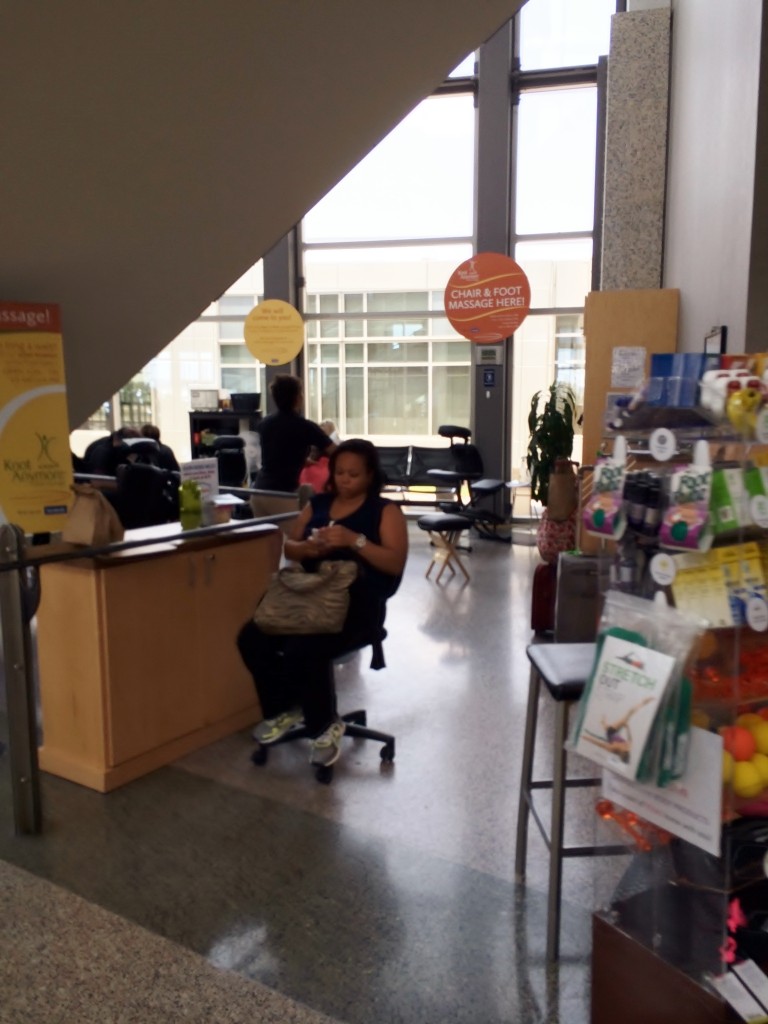 Admiral’s Club and the United Club both have lounges at Austin Airport. 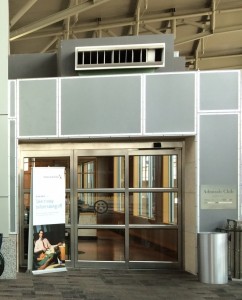 The terminal is connected to a 3,000 space parking garage used for both public parking and rental car pick-up and return.

Finally, if we haven’t given you enough ideas of things to do above, and if you’re killing some serious time (but not enough to go in to the city, because of course we’d recommend that first) – check out some of the fab Austin Airport art.

There’s art for you to enjoy both pre- and post- security. We enjoyed this spaceship exhibit hanging from the ceiling, near Gate 13. 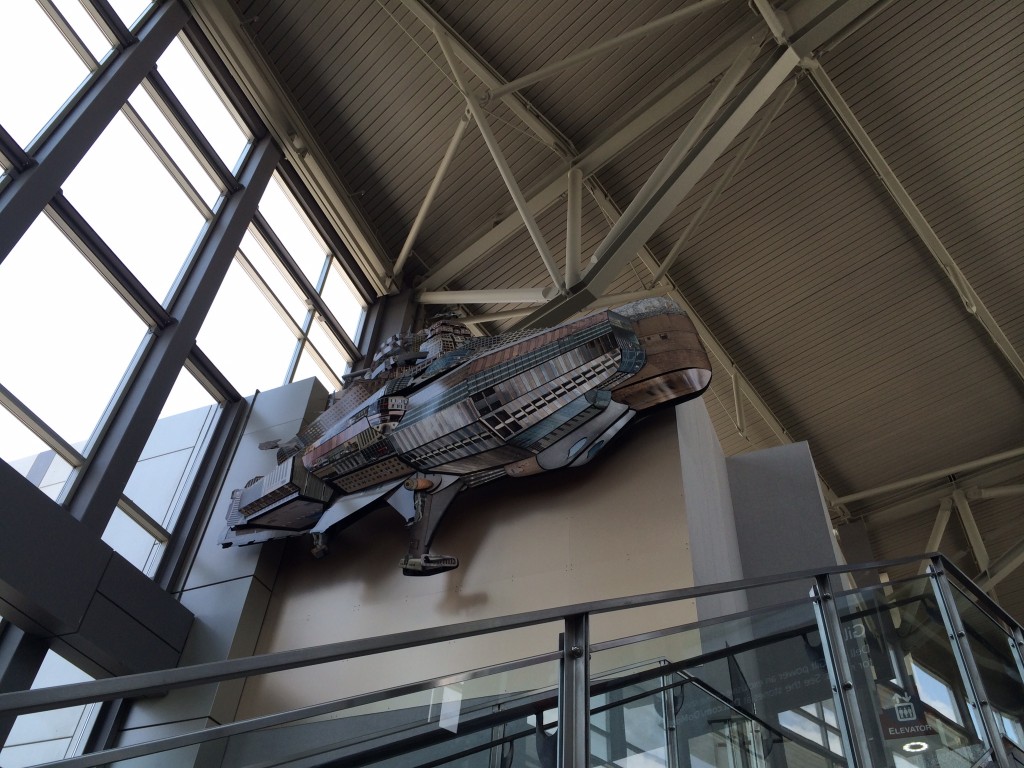 And also this Jet Engine Turbine Blade, marking the 100th anniversary of the Wright brothers historic first flight – stairway landing across from Gates 6 & 7.